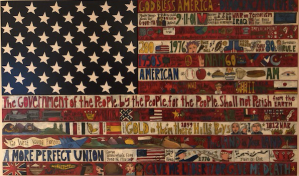 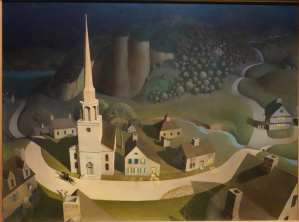 Paul Revere’s midnight ride on April 18, 1775, was an iconic event leading up to Independence Day the following year, although its role as an actual tipping point between colonial discomfort with Britain’s royal authority over it and explosion into full-blown revolutionary action is beyond this essay. Causality aside, Revere’s ride inspired popular imagination, legend, and poetry. Henry Wadsworth Longfellow’s poem, published nearly 85 years later in January, 1861, in The Atlantic Magazine, reverberates in my brain, having learned it in my grade school yet another century later: “Listen my children and you shall hear of the midnight ride of Paul Revere …” That meme had legs and the idea of 13 United States of America became a reality and eventually transformed into the idea of a nation.

American regionalist painter Grant Wood (1892-1942) imagined the midnight ride from a bird’s-eye perspective in 1931 (above). You can view the original in Washington DC at the SAAM. The tiny detail in front of the church repeats the once-common misperception that horses gallop with all four legs in the air, extended front and back (below, top). Grant Wood either didn’t know better or else was deliberately naïve in using the archaic style. He was not really a student of the art of motion, his work only occasionally depicting moving objects such as the impending calamity in Death on the Ridge Road, painted in 1935 (below, bottom). 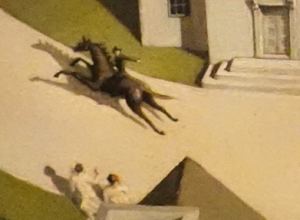 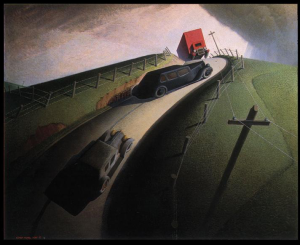 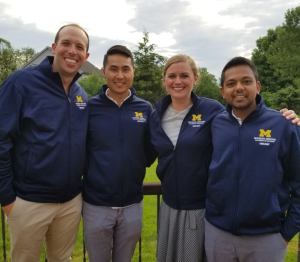 We celebrated independence for our chief residents and fellows  last month at the Art Museum of the University of Michigan. [Above: chiefs, courtesy Ankita Shah] The Museum had its origin in 1910 as Alumni Hall and I have fond attachments to it, not just because of the appearance, the contents, and its generous uses to the university and the public, but personally as well because our youngest daughter was married there, the Shirley Chang Gallery is housed there, and my late friend Helmut Stern left much of his great collection there as well. 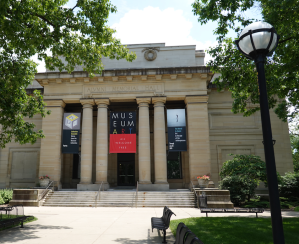 Most graduations are moments of personal liberation and independence. Residents and fellows usually jump from an intense paradigm of responsibilities, schedules, and education to the freedom of their practices of urology, although that world has become more constrained than a generation ago. The idea of the “private practitioner” in health care, especially for surgical specialists is ancient history, although even back in those old days when most urologists entered small groups, they carried the discipline and professionalism of their training mentors and programs with them, out into the world.

Our graduation at the Art Museum was much more about character and culture than personal liberation. Junior residents presented the life stories of the graduating chiefs with grace and humor. Ella Doerge (story told by Rita Jen) will go to London for fellowship with Tim O’Brien at Guy’s Hospital. Ted Lee (story told by Matt Lee) will undertake a three-year Boston Children’s Hospital Fellowship. Zach Koloff (story told by Chris Russell) will also go to Boston to a first-rate Lahey Clinic – affiliated practice. Parth Shah (story told by Michael Fenstermaker) will join the excellent USMD Urology group in Dallas-Fort Worth. Over the five years these chiefs spent with us they became physicians, surgeons, and urologists that I’d trust in a heartbeat with the care of friends, family, or myself.

Faculty awards went to Professors Matt Davenport and Jim Shields of the Department of Radiology and Chris Sonnenday of the Department of Surgery who have been essential collaborators with urology. Professor Alon Weizer was recognized as the Team Player of the Year. Among his many gifts, Alon is both a great virtuoso surgeon and a selfless team player, a very rare combination of talents. Vesna Ivancic, the embodiment of professionalism, was recognized for that crucial characteristic of a physician-teacher. The residents presented two awards to faculty: Sapan Ambani was given the Silver Cystoscope Award and Khaled Hafez was given the Julian Wan Award for Excellence in Resident Mentorship.

Chair Palapattu supervised a great evening and the new awards were wonderful additions. Kudos to Program Directors Kate Kraft and Sapan Ambani, Nesbit Society President Mike Kozminski, and Lora Allen. The evening was especially enjoyable for me, freed of responsibility for being sure all went well and the bill was paid.

New folks. Here in Ann Arbor we didn’t need a Paul Revere to announce the good news that our new residents and fellows joined us a few days ago and thankfully no calamities were encountered enroute. Joel Berends from San Antonio is the first-ever recipient of the American Urological Association and Urology Care Foundation Physician Scientist Training Award that will take him from now through June 20, 2027. Anna Faris from Cleveland Clinic, Mahir Maruf from Ross University in Florida, Catherine Nam from Emory, and Alexander Zhu from Des Moines University have also joined Michigan Urology and their program will go through 2024. The annual residency refreshment of July is always eagerly anticipated, although why it happens this particular month of the year and not at the beginning of the fall semester, as is usual in academics, is an interesting question, possibly due to coincidence with start of the common fiscal year of hospitals.  [Below: AA Farmers’ Market] 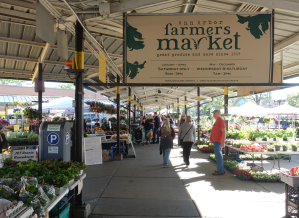 Chang Lecture. From 2007 to 2018 the Urology Department held a series of yearly lectures on art and medicine, to celebrate Dr. Cheng-Yang Chang for his educational and clinical roles at Michigan Urology and his work in pediatric urology. Dr. Chang’s father, Chang Ku-Nien, was a master painter of 20th century Chinese art and much of his work resides at the UM Art Museum. The Shirley Chang Gallery, named for Dr. Chang’s late wife, is a peaceful and beautiful refuge. [below: Shirley Chang Gallery] 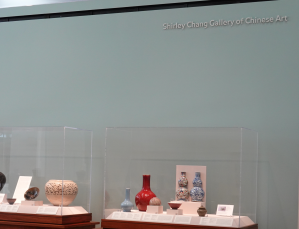 Dr. Chang began training under Reed Nesbit and completed the program here under Reed Nesbit and Jack Lapides in 1967. His two Chang sons remain closely tied to Michigan Urology. Ted completed training in urology under Ed McGuire in 1996 and is now in practice in Albany, working near another great Michigan urology alumnus Barry Kogan. Ted’s older son, Kevin, recently graduated from UM, but is headed for the business/informational technology world. Hamilton, UM 1989, is an investment banker in Chicago and one of Michigan urology’s greatest advocates. [Below: Ku-Nien Chang. Taiwan Cross Island Highway, 1967. UMMA.] While it seemed appropriate to sunset the yearly Chang Lecture series when the urology chair turned over to Ganesh Palapattu, the idea of intertwined art and medicine lives on in our department and periodic Chang art and medicine events are likely to appear. 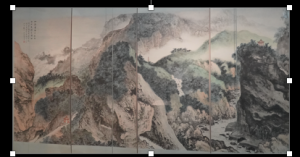 The Chang Lectures had three objectives. The first two were: celebration of an important and worthy Michigan Urology family and the responsibilities of universities to offer “public goods” – open lectures on general topics (even from a specialized department such as urology). The third goal relates to a belief that discussions of the conjunctions of art and medicine belong in medical schools and health care training programs. Art and medicine converge at the human interior. For artists, that interior is a matter of intellect, soul, hope, aspiration, fear, grief, love, and beauty. For those of us who tend to the contingencies of physical bodies, the interior is a matter of brains, bones, organs, fluids, cells, systems, and naturally includes our visible integument. When we began the lectures, visual art took center stage, although no art form was out of bounds and Joel Howell’s inspiring talk in 2009 focused on music.

The Smithsonian American Art Museum (acronym, SAAM) is a favorite stop in Washington, DC. Once known as the National Portrait Gallery, SAAM is a wonderful place for a quick visit, something less feasible at most other Smithsonian museums, but you certainly can spend a day at the SAAM where Paul Revere’s Ride by Grant Wood resides. When you happen by there, the Daguerre monument on the museum’s Seventh Street side is worth a look. Daguerre’s work grew into modern photography that would show how horses actually gallop. 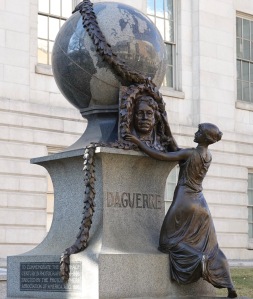 Leland Stanford, a horseman among other things, commissioned photographer Eadweard Muybridge (1830-1904) to study galloping horses photographically. The gallop is too fast for human eyes to analyze and for centuries visual artists depicted all four legs were simultaneously in the air, extended forwards in the front and backwards in the rear, during a gallop. On June 15, 1878 Muybridge depicted Sallie Gardner at a Gallop, a series of 24 pictures in rapid succession and its 24 frames constitute the first moving picture. The gait analysis showed that when all four feet were simultaneously in the air the legs were gathered below the belly of the horse rather than extended front and back. Sallie Gardner was Stanford’s Kentucky-bred mare and the jockey was named Gilbert Domm. 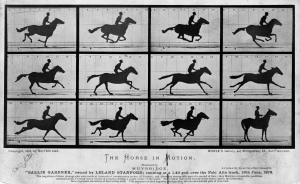 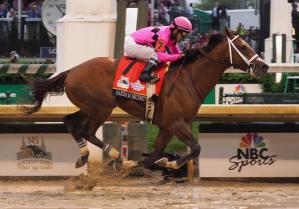 Luis Saez riding Maximum Security crossed the finish line at the 145th Kentucky Derby at Churchill Downs, May 4, 2019, ahead of the thundering herd, but was disqualified for interference with other horses. [Above: Reuters photograph] One hopes the interference was accidental, but rules are rules, the photographic evidence of the interference was self-evident, and it’s reassuring to find occasional evidence that the end doesn’t always justify the means. The arc of the moral universe may be long, but sometimes we live long enough to see it bend toward truth.

Independence Day celebrates the first days of the American nation, as proclaimed in the astonishing Declaration of Independence, a beautiful piece of prose hammered out by committee with compromises made. The Constitution, produced also by a team, is a clunkier set of rules and regulations that was amended more than a year later with some ideas many of its signers took for granted and assumed the original Constitution offered no constraints on essential freedoms in a democracy. James Madison, principal author, finally was convinced that certain amendments were necessary including explicit enumerations of specific freedoms that people needed from government. The original Bill of Rights listed explicit protection for freedom of speech, religion, the press, assembly, and the right to lobby the government for redress of grievances. These were listed in the Third Article of the Bill of Rights that became incorporated in the First Amendment of the first ten amendments to the Constitution. The original First Article of the Bill of Rights dealt with the formula for representation in the House of Representatives and the Second Article specified details of laws related to compensation of the representatives.

Historian Gordon Wood, who once taught at Michigan and was popularized in a scene of a Harvard Square tavern argument in the 1997 film Good Will Hunting, once wrote: “… it was Madison’s personal prestige and his dogged persistence that saw the amendments through the Congress. There might have been a federal Constitution without Madison but certainly no Bill of Rights.” [Representation in the American Revolution, University of Virginia Press (Charlottesville, VA), 1969. (ISBN 978-0813927220)]

Human potential – with its science, technology, knowledge, and truth – is severely deformed and stunted when government restricts freedom of speech. Freedom of religion, the press, assembly, and the right to petition actions of government necessarily follow freedom of speech. Truth, equality, and the rights of The First Amendment come close to being the most basic secular principles of humanity and are always at risk and threatened in every civilization.

One thought on “Independence”

University of Michigan Department of Urology, Click the picture to go to the department site.