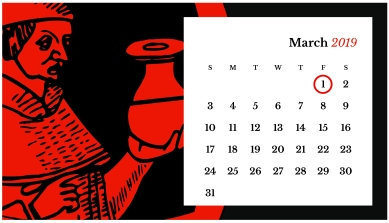 M&Ms.  Once a month our department gathers at 7 AM on a Thursday morning for Morbidity and Mortality (M&M) conference, as is typical of most surgical training programs. This recurring touchpoint integrates the triple mission of medical academia so we can learn from the serious complications inherent to our work, improve the quality of that work, and discover new avenues of investigation. Typically, residents or fellows tell a story of a complication or a death, faculty members involved consider “what might have been done differently,” others share their experiences and thoughts, and sometimes a literature-based short presentation is offered. Complications are classified by the Clavien system. [Above: January 2019 M&M with Priyanka Gupta discussing the new complications entry system.] These conferences fine-tune our mutual relevance, allowing regular inspection of our complications, discussion from the perspective of quality improvement, and calibration of individual work with that of colleagues.

When I was a resident, grand rounds centered around the chair, whose every opinion mattered. Performances as residents could make or break progression through residency and chances for fellowships or good jobs. The chair critiqued everyone else and molded the department in his image (always a “his” during my training), much like an Autocrat at the Breakfast-Table, the title of essays by Oliver Wendell Holmes in 1858. Those of us who made it through the process naturally carried a deep respect and even fondness for the chair, while others were not quite so enamored. Things have changed, especially in big departments, with decentralization to divisions and teams much more the order of the day, and while structure is still necessarily hierarchical (the buck must stop somewhere), a more democratic flavor rules the day at M&M conferences and grand rounds.

Although chairs are no longer the center of departmental universes, they set much of the tone and represent the team administratively to the rest of the institution. Departments improve when leadership rotates carefully, as it has in our case, and today it’s official: we welcome Ganesh Palapattu to our chair position, and Brent Hollenbeck as vice chair of the University of Michigan Department of Urology.

The Clavien-Dindo system, described in 2004 by Zurich surgeons Pierre Clavien and Daniel Dindo, assigns grades to surgical complications: Grade I events are small deviations from normal expected operative or postoperative courses; Grade II events are atypical medication needs, including blood transfusion and total parenteral nutrition; Grade III are complications requiring surgical, endoscopic, or radiologic intervention – with or without anesthesia; Grade IV are life-threatening complications; and Grade V is death. [PA Clavien et al. Ann Surg. 250:187-196, 2009.] Our M & M conferences focus on Clavien III or greater complications, mainly to identify learning opportunities: what could we do better, personally, or in our teams and systems? Human activities are inevitably susceptible to periodic errors and negative outcomes, but medical complications are serious disappointments and sometimes tragedies for patients and their families. Each complication is a story, often a complex one. Faculty and residents must learn from them, grieve over them, and learn to deal with the adversity. Just as importantly, surgeons must move on to take care of the next patient. The seminal book Forgive and Remember by Bosk, discussed on these pages in the past, is worth renewed attention. [Bosk CL. Forgive and Remember. Managing Medical Failure. University of Chicago Press. 1979.]

Getting “the story” right is a universal necessity, whether from personal points of view, social perspectives, or occupational demands. Journalists, teachers, politicians, engineers, lawyers, and physicians need to understand stories and ascertain truth. Surgeons need to know a patient’s story from the diagnostic perspective in order to come to operative solutions, and if complications occur, then it is imperative to understand those stories, for only then can the practice of medicine improve.

The idea of what is “right” – that is what can be proven true or is generally accepted as correct – is surprisingly complex, requiring a socially shared sense of “truth” and factual reliability.  A person’s ability to adhere to truth is a matter of integrity, and we expect higher levels of integrity from physicians, scientists, and engineers than many other occupations. Yet, shouldn’t we expect integrity in all responsible occupations, from chefs to politicians? When is it forgivable to tamper with the public trust for personal gain or malicious reason and what are the boundaries of the First Amendment? These tough questions are beyond solution in Matula Thoughts, but should be considered and discussed by all members of society.

It is a fact, as this line is written, that it is not raining outside my window, but that fact will change with time and environment. Some facts are difficult to ascertain and people sometimes have legitimate misconceptions of reality, uncertainty being intrinsic to humanity. Deliberate misrepresentation of reality, however, is corrosive to any social group and to society at large. Deliberate misrepresentation is expected in the products of fiction and the entertainment industry, but not in their business dealings. Misrepresentation in business, politics, religion, etc., erodes trust, essential for a healthy society. When stories become propaganda, or opinions masquerade as journalism, free speech is abused. Misrepresentation in medicine and science, worse matters, are social crimes.

These last charges are tricky, running contrary to the First Amendment and the cherished idea of free speech. Yet, “yelling fire” in a theater or its equivalent on social media is too  dangerous for society to tolerate. Democratic societies have yet to figure out where and how to draw the line between deliberate misrepresentation and free speech, and the hyper-pace of contemporary social media exacerbates the dilemma. Given that the ideas of the First Amendment are self-ordained “rights” of humanity, it is unlikely that they can be preserved if they cannot be better stewarded to serve the public, rather than serve individuals, factions, or ideologies.

Then, too, there is the matter of the “backstory,” the history, conditions, and other narratives leading up to a particular story and the circumstances that frame it. In health care the backstory includes co-morbidities, while in the field of economics such circumstances are dismissed as externalities. Although stories are simpler and easy to “understand” when stripped of complicating and confounding matters, stripped-down stories rarely convey the whole truth of a matter for accurate understanding.

It is hard to escape the name Oliver Wendell Holmes in American history. There were two of them, the first an iconic American physician (1809-1894) and the second, his son, an iconic supreme court justice (1841-1935). Both lives and careers centered on stories and truth.

Medical practice is a highly social profession and business. Socialization of practitioners with specialized knowledge and experience, sharing their stories, is a route to progress and today’s M&M conferences are programmed opportunities for this teamwork. Medical education, standards of practice, quality improvement, and research have been built around socialization since ancient times of Mediterranean and Asian medical practice, medieval professional guilds, and doctors in the early days of the United States.

One sparkling example was The Boston Society for Medical Improvement, doctors who wanted to share ideas and ascertain truths. Established in 1828 by John Spooner with 11 members, the Society quickly grew to 35 by 1838. Meetings were held the second and fourth Monday each month, originally in Spooner’s rented room on Washington Street.  A cabinet keeper managed a collection of specimens contributed by the members. Only “elite” practicing physicians of Boston were eligible and a younger set of physicians in 1835 formed their separate Boston Society for Medical Observation, echoing the terminology of Professor Louis in Paris, under whom Holmes studied. The two competing Boston groups ultimately merged in 1894.

Puerperal fever & a murder. At a summer meeting in 1842 of the Boston Society for Medical Improvement, JBS Jackson queried fellow members their opinions regarding the possible contagiousness of puerperal fever. Jackson was concerned by the death of a colleague after treating an infected woman, and he knew of other infections incurred by subsequent patients the decreased physician had treated before he died. Holmes, a member of the original French Society of Medical Observation during his study in Paris a decade earlier, took up Jackson’s question and presented his own independent research, “The contagiousness of puerperal fever,” back to the Society on February 13, 1843. The presentation was commemorated in a 1940 painting by Dean Cornwell, That Mothers Might Live (below).

The New England Quarterly Journal of Medicine and Surgery published Holmes’s talk in April and it was reprinted as a pamphlet (top, lead picture). Holmes was certain that “obstetricians, nurses, and midwives were active agents of the infection, carrying the dreaded disease from the bedside of one mother to the next.” This was among the earliest good evidence for germ theory of disease.

Holmes was dean of Harvard Medical School when he factored in the sensational murder case of wealthy Bostonian George Parkman in 1849. Parkman had studied medicine, but never practiced, so it is likely that the Parkman identified in the Boston Society for Medical Improvement was his relative. The murdered George Parkman was a wealthy Bostonian who had studied abroad, received an MD in Aberdeen, Scotland, and studied further in France, taking particular interest in mental illness. After returning home, however, he never practiced medicine, instead managed family property, so was ineligible for the Medical Improvement Society, although an admired friend of Holmes.

John Webster was also from an affluent family and had studied abroad. Later in Boston Webster became professor of chemistry and geology at the medical school, but ran into debt often and borrowed extensively, including from George Parkman. In an argument over a debt, Webster killed Parkman in his medical school office on November 23, 1849, dismembered the body, and hid it in a locked cellar basement restroom. An astute custodian, Ephraim Littlefield, concerned about the popular missing Bostonian, broke into the room and discovered the body remnants on November 30, 1849.  Holmes testified persuasively at the 12-day trial and Webster was executed by hanging on August 30, 1850. Holmes dedicated his 1850 introductory lecture to the medical school class in Parkman’s memory. [Below: OW Holmes c. 1879.] 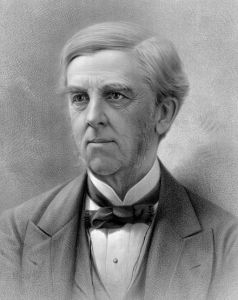 Holmes enjoyed stories, although happier ones than that of his murdered friend. He wrote poetry and books of fiction and nonfiction. A founder of the Atlantic Magazine, he contributed to it regularly and mingled with the literary set in Boston, including J. Elliot Cabot, James Russell Lowell, Ralph Waldo Emerson, and Henry Wadsworth Longfellow. Holmes popularized the term Boston Brahmin and was certainly one of them. The Autocrat of the Breakfast-Table is a collection of 1857-1858 essays Holmes wrote for The Atlantic, published in book form in 1858. The stories are one-sided dialogues between a genial and “anonymous author” and other residents of a New England boarding house. It is, perhaps, more than a coincidence that the fictional detective imagined 40 years later by Dr. Arthur Conan Doyle, would share the Holmes surname.

Short story. Frédéric François Chopin born this day in 1810, six months after Holmes, lived a short life of only 39 years. Although numerous photographs exist of Holmes, only two exist of the great Polish composer and virtuoso pianist. [Below: top, Chopin c. 1847, http://commons.wikimedia.org/wiki/File:Chopin1847_R_SW.jpg]

Photography as a technology was new and rare during the early lives of these two men, but Holmes’ luck of longevity gave him greater opportunity as a subject. [Above: Chopin c. 1849. Daguerreotype by Louis-Auguste Bisson.]

Thanks for reading Matula Thoughts.

University of Michigan Department of Urology, Click the picture to go to the department site.